Between January 1 and December 31, 2017, the world witnessed the exponential growth of a new asset class: when the market cap of the entire cryptocurrency market exploded from roughly $1.6 billion to $615 billion – an unprecedented 3,500% increase in a single year.

For those of us who were involved from the beginning – like my readers and I – the growth was intoxicating. We minted many Main Street millionaires almost overnight.

But the first half of 2018 has been a different experience.

After taking a 60% haircut, the entire market waffled along…

For anyone who invested in the later stages of the boom, those incredible gains you were promised seem to be nowhere in sight. 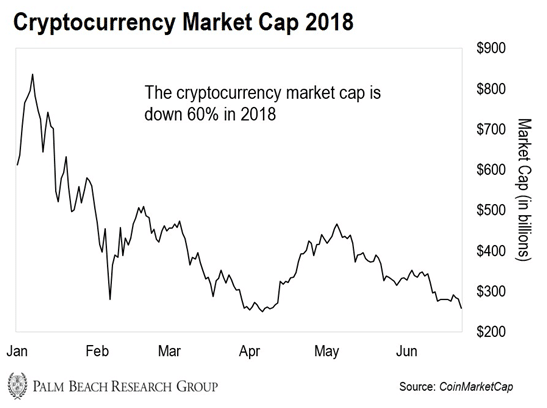 So it’s only natural for crypto investors to be left wondering, “What’s going on?”

In fact, if you’re in this boat right now, your biggest enemy is likely boredom.

A Crypto Investor’s No. 1 Enemy

It’s the biggest enemy of every crypto investor…

It can become so strong, in fact, that many people will start trading their cryptos to try and make money on short-term price swings.

But that’s not what we’re doing.

Contrary to some of the popular opinions you’ll see out there in the mainstream media, what we saw in the 2017 crypto market was not a bubble forming and bursting.

It was the beginning of a long-term trend in the world’s financial system—one that cannot be reversed… and is only just beginning.

We didn’t invest in cryptos to catch a few high-fliers. We invested to take part in the emergence of this trend.

So that’s what we’re doing: We’re holding for the long run. And that’s an important distinction.

You see, all long-term holdings go through cycles—and Bitcoin cycles like no other.

Bitcoin goes up… then it goes down. When it does, everyone declares it as dead. And right about then, it starts to rebound to new highs.

We’ve gone through this cycle multiple times over the years. Just look at this chart of Bitcoin and you’ll see the many cycles we’ve been through:

What we are currently experiencing in the crypto market is simply one more downturn. We’ll see Bitcoin rise again… and soon.

“What will make Bitcoin and cryptocurrencies rise again?” you might ask.

Before I tell you that, let me tell you the story of one company that experienced something similar to what Bitcoin is experiencing now…

We’ve Seen This Before…

Consider Microsoft back in the 1990s.

At that time, Microsoft CEO Bill Gates told reporters that someday, everyone would have personal computers (PCs) on their desks and that these PCs would be cheap.

Everyone thought he was nuts. No one could see his vision for the future. But fast-forward 10 years, and everyone had a PC. You can get a new computer today for a few hundred bucks.

Along the way, Microsoft had a couple of multi-year periods of consolidation. Just look at a chart of Microsoft in the 1980s and ’90s: 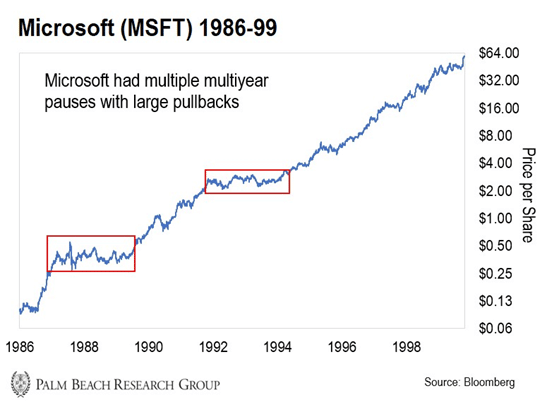 In those consolidation periods, Microsoft fell heavy. In the two boxes on the chart, Microsoft experienced 30% drops.

And Microsoft had several other large pullbacks in 1986 and 1991. But it recovered very quickly both times.

We’ll never know how long these pullbacks are going to last. So we focus on what we can control: the research. What we want to see is how many people are adopting the technology.

During Microsoft’s pullbacks and consolidations, computer use was growing. Businesses and people were adopting the technology.

Companies were moving to use spreadsheets and databases. Schools started building computer labs. And people used computers at home for games and personal organization.

The right move during this time was to hang on to shares of Microsoft. If you had, you could have turned a $2,000 investment into over $1.2 million.

I’m convinced the next Microsoft story will come from the blockchain.

How am I so sure we’ll see this mass adoption?

Let’s step back and talk about the problems other life-changing technologies had.

Do you remember what cell phones were like in the 1980s? People paid thousands of dollars for them. They were so big  you had to carry them around in something resembling a suitcase.

These cell phones also had very limited reception. There weren’t as many towers built out as there are today. So you could have a $2,000 phone with a $200 monthly fee and still not be able to make any calls because of limited reception.

Nobody thought that cell phones would become widely adopted. It was just a playtoy for the rich.

And do you remember what a pain it was to connect to the internet back in the 1990s?

You had to wait while your computer connected via dial-up modem (with the annoying noises). Half the time, your America Online service didn’t have enough phone lines to make connections. You’d get a busy signal and would have to call again.

Then, once you connected, you had to wait a minute or two for each web page to load—even longer if there was a picture on the page.

And if some other joker in the house picked up the phone, you’d get kicked off the internet.

It was a disaster. But guess what? Technology evolved. And now both technologies are essential to our everyday lives.

Cryptocurrencies are no different. It’s tough to use Bitcoin for transactions right now. Not many merchants accept it. Fees make small transactions impractical. And it fluctuates too much for a currency.

It’s the same for all the transactional coins right now. But that’s quickly changing. We are seeing more and more adoption around the world.

That’s why my team and I are constantly combing through all our positions to make sure the technology continues to evolve and that adoption is increasing. And we’re seeing a lot of that across the board.

The strategy we’re using is to have small positions in many different cryptocurrencies, and to hold tight through consolidation times. If you do that, you’ll be in a position to make outlandish money in the next rally.

It’s just a matter of time until the market catches on. When it does, we’re going to see another explosive move to the upside.

You do not want to miss that move.

We’re coming up on July 19th, when Glenn Beck and I are sitting down for our LIVE exclusive event: The Great Cryptocurrency Conspiracy of 2018. If you haven’t registered yet, please click here.

You see, for the last two years, I’ve been using a secret trading tool to track—and profit from— the growing crypto market. This tool is single-handedly responsible for turning many of my readers into crypto millionaires…

And right now, it’s giving us key signals about the crypto market—hard proof that we’re gearing up for a massive move higher. Stay tuned…