$0 p/l for me Monday as I didn’t buy or sell any small caps. I did however pick up a few options in the Millionaire Roadmap. IWM puts off the ascending triangle supply line which were up about $7,000 Monday and oversold SNAP calls, also up, to the tune of about $3,000. Markets are opening weaker to start Tuesday which should help the puts and SNAP had good news after hours which could trigger a bounce and nice win as well. With any luck I’ll have paid for my vacation with my first 2 swing trades, knock on wood.

So, what triggered the IWM to roll Monday afternoon? The usual suspect, a tweet from Trump, this time about the Iran deal.

Given the market, particularly the IWM, has made a big 2-day move off the ascending triangle demand line I’ll be cautious about adding any small caps here early Tuesday but instead monitor the market for a buying opportunity once it settles, which I suspect will beWednesday. After that I bet we’re getting close to that $160 breakout I’ve been monitoring closely for a few weeks.

Mark your calendar. The Mensa trader (Weekly Money Multiplier) is teaching in the Millionaire Roadmap chat Tuesday and Friday from 2 – 4 p.m. ET this week. Last session he made +202% +$9,100 in about an hour live, watch the video here then mark your calendars.

CLNE and MOSY performed nicely Monday and have now moved up too much for me to jump in. I’ll remove the Fibonacci retracement plays from my scan today too, since those likely won’t run against the overall market wins. I’ll do a few Fibonacci scan Wednesdayafternoon, my favorite time to pick up a few of those trades.

CNET is my favorite continuation pattern Tuesday and if it holds $3ish I’ll be looking for a swing. Sure looks a lot like NFEC did before it erupted yesterday and I nearly bought NFEC late last week – would’ve been a huge win. Illustrates you’ve gotta take some risk to outperform the markets and CNET looks like one that could pull off a similar move, especially since there’s a trend reversal in place after some good news recently.

NFEC and BLNK are on early Fibonacci watch for Wednesday afternoon, definitely looks like one I’ll target later in the week.

I’d like to get into WATT for a swing Tuesday afternoon around $17 if it comes in and only if the IWM finds buyers after the early dip, otherwise I’ll wait to enter that closer to $16 and hold for a few days for a move back up, ideally $20+ on news.

No updates on long-term LQMT and ROX, though I do expect the iPhone 11 media coverage and speculation to start driving LQMT into September’s iPhone 11 launch. As you can see on the chart below it has a history of doubling from this time of year into August. 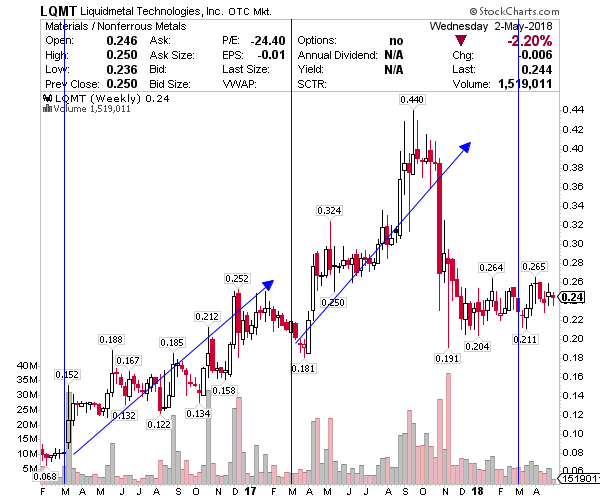 Ultimately I’ll lay low, maybe do some snorkeling and scuba for the first half of the day and then run fresh scans at Noah’s nap time to determine if it’s the ideal environment to put on new swings or be patient.

Wish me luck with the IWM puts and SNAP calls, it’d be great to pay for this vacation with my first 2 trades and then back off unless something super juicy shows up.